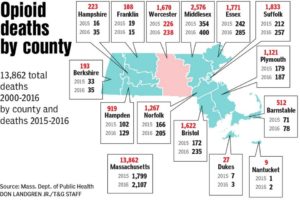 Without that support, Michael Botticelli told the crowd, “What we do at the state and local level matters even more.”

He called on local communities to address the opioid epidemic as a public health crisis, by working on prevention, ratcheting down opioid prescriptions, getting people into treatment, improving access to medication-assisted treatment, and meeting the needs of people at highest risk of opioid overdose death, including people with mental health disorders and those coming out of correctional facilities.

Massachusetts has led the country in these efforts, he said, but there is more to do.

He called on health care organizations, law enforcement, policymakers and citizens to work together because “it’s multi-faceted.”

Read more about Addiction in MA